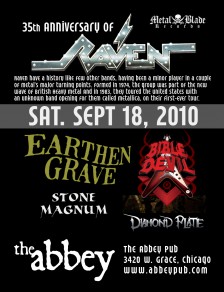 BIBLE OF THE DEVIL will share the stage with NWOBHM stalwarts RAVEN as part of their 35th Anniversary tour Saturday, September 18th at The Abbey Pub in Chicago.  RAVEN’s lineup features founding members John and Mark Gallagher
with Joe Hasselvander (ex-PENTAGRAM) on drums.

RAVEN have a history like few other bands, having been a minor player in a couple of metal’s major turning points. Formed in 1974, the group was part of the New Wave of British Heavy Metal. And in 1983, they toured the United States with an unknown band opening for them called METALLICA, on their first-ever tour. They’ve always stayed true to their thrashy,self-proclaimed “athletic rock” sound and recently released their latest effort ‘Walk Through Fire’ (Metal Blade). 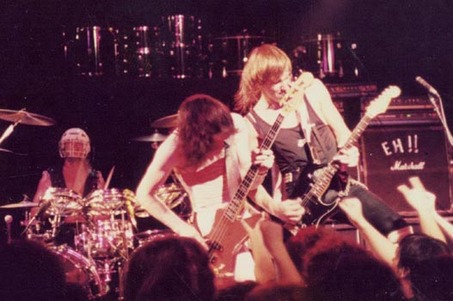