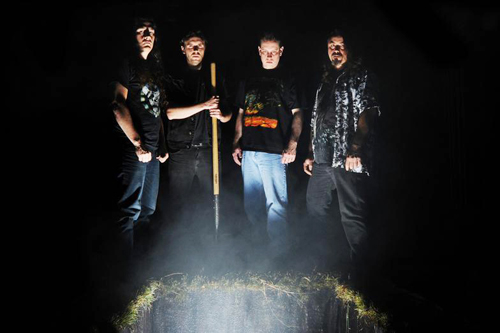 A free streaming of a second advance track taken from the upcoming PHARAOH album “Bury the Light” is now available on Cruz Del Sur Music’s bandcamp and Facebook page.

“Burn With Me” is probably the most in-your-face song on the album, and it is actually a reworking of the High Spirits‘ demo song  “Set Me Free”.

“Bury the LIght” will be released on the 24th of February in Europe, and on the 6th of March in the United States/Canada.

What’s in store for the listener?  Guitarist Matt Johnsen explains: “We tried to add more textural elements to our songs while continuing to cut as much extraneous material as possible.  The songs on this album are dense, but hopefully they never overstay their welcome.  The basic template is the same as on Be Gone, but the album is less dark overall, and perhaps a little faster.  I think anyone who stuck it out with us after we shed the remainders of our obvious Iron Maiden worship after The Longest Night will be happy with our progression on this album.  It’s still crammed full of traditional elements, of course, but we’re not trying to be retro or old-fashioned.  We want to move melodic metal forward.”

Pre-orders for the CD and limited edition LP will commence on the 9th of February through Cruz Del Sur Music site.