Are you ready for some more unhinged, powerful classic heavy metal?? Well, be ready because VISIGOTH’s  “Final Spell” Mini LP is out now on vinyl on Cruz del Sur Music and Sarlacc Productions!!! Buy your copy now:

VISIGOTH is a young US band formed in 2010 in Salt Lake City. Claiming influences from Dio, Omen, Twisted Tower Dire and Atlantean Kodex, they have raised quite an interest in the metal community with their traditional, epic-tinged, no-frills heavy metal. The press has said about them that

“no matter what genre of metal you tend to favour, there is nothing greater than pure unadulterated adrenaline pumping heavy metal performed the way the masters intended it, and this is exactly the way they envisioned it. “ (Dream Void Dreams blog)

“Final Spell is a definite jaunt back to a period that has spent many years in relative anonymity, only to find wondrous excavation by the younger, brasher military ready to lift the cracked and battered torch once more.” (Metal Psalter) 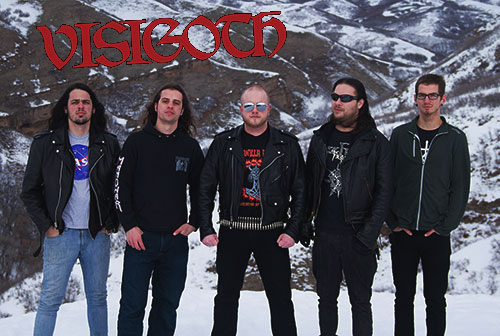 This edition comes complete with an enhanced, specific mastering for vinyl sound, an insert with lyrics and a new layout created by Paul McCarroll/Unhinged Art (Primordial, Scald etc.). The “Final Spell” vinyl is limited to 500 copies only, the first 150 coming in colored-vinyl.