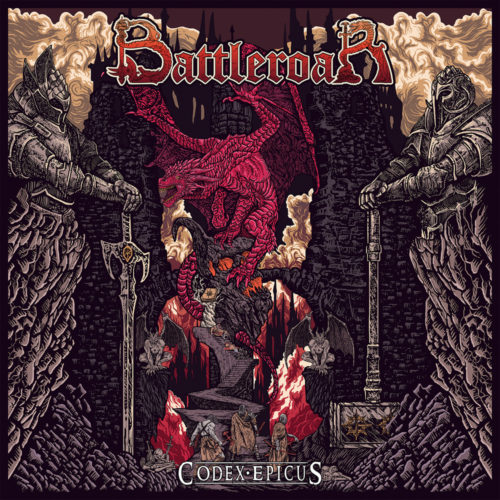 The follow-up to 2014’s “Blood Of Legends” was recorded at Devasoundz Studios in Athens, Greece and features a guest appearance from MANILLA ROAD guitarist/vocalist Mark Shelton on the song “Sword of the Flame”, reprising a role he first took on with “The Wanderer”, which appears on BATTLEROAR’s 2005 album, “The Age of Chaos”.

Comments BATTLEROAR guitarist Kostas Tzortzis: “Mark is one of my biggest musical influences, my mentor and my brother. I am lucky enough to know him personally for more than 16 years and we have shared many experiences in many different places on this planet! So, during the creation of this album, I found myself drained of inspiration, with a nice song on my hands half-finished, but with absolutely no idea how to get it done. Time was running out and I was getting desperate, so I thought of asking Mark for help. Mark has never failed me and this time was no different. He wrote the lyrics, created the vocal lines, sang them and he even added a guitar solo in the end of the song. The rest is history…”

Originally formed in 2000, BATTLEROAR’s self-titled debut album was released in 2003. The band followed it up with “Age Of Chaos” in 2005 before joining Cruz Del Sur for the release of 2008’s “To Death And Beyond…”