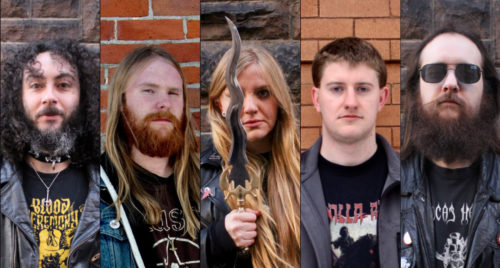 Buoyed by the positive response to their debut 2018 demo, “The Sword Woman”, the members of SMOULDER and Cruz Del Sur label head Enrico Leccese cemented their partnership at last year’s instalment of Germany’s Hammer Of Doom festival. “Enrico reached out to us prior to our performance and stated he was interested in chatting with us at the show,” says frontwoman Sarah Ann. “We’re all big fans of the label, so it was nerve-racking and exciting to be heading to our fourth gig ever (at a festival in Germany, no less!) and have the interest of a label who has released excellent albums by GATEKEEPER, SLOUGH FEG, ATLANTEAN KODEX, MAGISTER TEMPLI, LUNAR SHADOW and QUICKSAND DREAM, just to name a few. It’s a great fit. We are honored to be on a label that has so many mythic-leaning bands, particularly because I own a good 20 releases by the label and listen to them frequently!”

Originally formed in 2013, SMOULDER (who are rounded out by guitarists Shon Vincent and Collin Wolf, bassist Adam Blake and drummer Kevin Hester) had the smallest of expectations upon the release of “The Sword Woman”. Released by Hoove Child Records on a limited run of 100 copies, the demo quickly sold-out, prompting the band and label to push the run to 150 — which sold out just as quickly. Soon, the label had no choice but to press a 300 run of the demo to vinyl.

“All this has pushed SMOULDER from our initially very slow-moving state to one that’s interested in getting things done,” says the band, who operates remotely with two members in Illinois. “In the past year, our spread-out weirdos has performed multiple times, written and recorded a full-length and played alongside COVEN, HALLAS and WHILE HEAVEN WEPT in Germany. It’s been pretty fun getting together exclusively to write, perform and play to people who dig power doom about swords and magic!”

The “Times Of Obscene Evil And Wild Daring” album title was inspired by the Michael Moorcock short story “The Greater Conqueror”. “While our lyrics run the gamut of fantasy and touch on stories by authors like Moorcock, Robert E. Howard, George R.R Martin, C.L Moore and others, they are also injected with personal themes and interpretations,” notes Sarah. “Fantasy is often derided for being mindless by the uninitiated and it’s quite striking as the story themes are generally much deeper. They run the gamut and are frequently embedded with humanism, spiritualism, philosophy, globalism and the importance of fortitude, empathy, duty and responsibility. These stories can be incredibly empowering.”

With a stacked schedule that not only includes the release of “Times Of Obscene Evil And Wild Daring”, but also live appearances with CIRITH UNGOL, LIEGE LORD, BITCH, SAVAGE MASTER and SIREN HEX, among others, the members of SMOULDER are pragmatic about their standing within the ultra-competitive underground metal scene.

“We all write music that we want to hear,” closes Sarah. “There are other bands who are doing the same things that we love and we’re happy to be part of a broader movement of traditional metal that’s producing some absolutely killer stuff.”