Cruz Del Sur Music is proud to announce the signing of Australian occult doom metallers THE WIZAR’D. The label will release the band’s new album, “Subterranean Exile” on April 24.

Formed in 2004 by guitarist/vocalist Ol’ Rusty, THE WIZAR’D quickly staked their claim as one of their country’s best representation of vintage doom in the vein of BLACK SABBATH, WITCHFINDER GENERAL, PAGAN ALTAR, SAINT VITUS and TROUBLE. A series of demos, singles and EPs would follow before the band’s first studio album, 2008’s “Infernal Wizardry”. Along the way, THE WIZAR’D (who are completed by second guitarist Master of the Night, bassist Blackie and drummer Maniac Frodsham) developed their own style while paying homage to the aforementioned bands. 2010’s “Pathways Into Darkness” and “Ancient Tome Of Arcane Knowledge” only generated further interest in THE WIZAR’D, with the band notching a prime slot at the 2010 installment of the Hammer Of Doom festival.

The new year will bring forth the band’s latest studio album, “Subterranean Exile”. Drum tracking started in January 2018 at The Green Room in Hobart; the rest of the album was tracked at Heavy Chains HQ and was completed in May 2019. However, as Ol’ Rusty explains, THE WIZAR’D wanted to make sure they were one-hundred percent satisfied with the results. “‘Subterranean Exile’ follows on from where ‘Ancient Tome’ left off, we are still conjuring the same kind of arcane metal magick as the previous two albums, but in a more refined and direct way,” he notes. “The production on the new album is also a big step up from anything we’ve done before, thanks to the lengthy recording and mixing process and also thanks to the mastering job from Patrick Engel.”

As for the band’s deal with Cruz Del Sur, ‘Ol Rusty explains that the band made a list of “cool” labels they wanted to work with. At the top was Cruz Del Sur and its sub-label, Gates Of HellRecords.

“Both have an impressive roster of bands and operate and present themselves in a cool, old-school manner which we think is important,” he says. “Gates Of Hell was impressed by the album but felt that it might be better suited to what their parent label Cruz Del Sur is releasing these days. We are very happy to be included with a roster of legendary bands like SLOUGH FEG!” 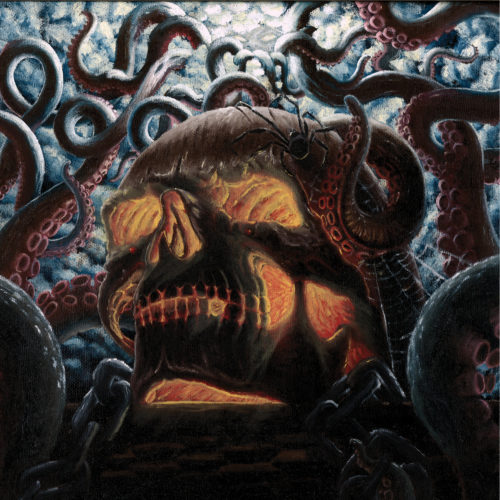