German traditional metal heroes HAMMER KING have issued the video for “Locust Plague”, which comes from their 2018 studio album, “Poseidon Will Carry Us Home”. The video — shot in the band’s natural live element in front of their loyal, headbanging fans — was edited by Christian Palm.

The decisioning behind the “Locust Plague” video was simple for HAMMER KING. In an album filled with triumphant, sterling anthems, “Locust Plague”, in its barn-burning glory, has become an instant live favourite.

“We just recently moved the song up to third in the setlist,” says guitarist/vocalist Titan Fox. “We also love the song because it captures the weekend we spent in Rome playing Cruz Del Sur Music’s ‘Burn This Town’ festival with ROSAE CRUCIS and SACRED STEEL — it’s all there in the lyrics. I’ve always liked songs that told a true story, sort of like SAXON’s ‘And The Bands Played On’. Gladly, the King gave us a song to remember the festival forever.”

“The Poseidon Will Carry Us Home” album cycle has surpassed expectations for HAMMER KING. In addition to critical and journalistic acclaim, the band has expanded its reach in the continental metal scene, something the King is very pleased about, according to Fox. The immediate future will find HAMMER KING playing a handful of important live dates, with other more “pleasurable” happenings taking place as well.

“HAMMER KING will certainly spend some days refuelling at the nudist beach of Saint Tropez Kingdom,” says Fox. “You know, beautiful naked women to our left, beautiful naked women to our right. But we will keep playing shows as well. A benefit festival with TANKARD is next, we will play a very small metal cruise on a river in the French-German borderland, then there is a festival with GRAVE DIGGER and GIRLSCHOOL.

“At the same time, we are already working on songs for our fourth album. Around 20 ideas are floating, but not all will be on the album. We have started early this time, so there is plenty of time to pick only the best of the best of the King‘s songs for the next album.” 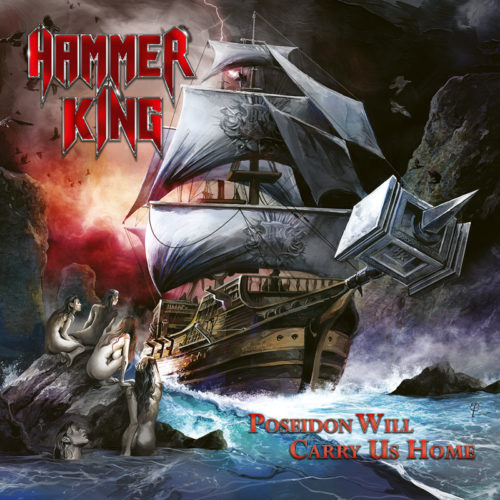 German true metal ensemble HAMMER KING will release their third full-length, “Poseidon Will Carry Us Home”, on October 5 via Cruz Del Sur Music.
Recorded at Studio Greywolf with POWERWOLF bassist Charles Greywolf at the helm, “Poseidon Will Carry Us Home” is an unabashed bow to classic, anthemic, hook-laden metal, proving HAMMER KING was more than up to the task of meeting the often-high expectations that come with a band’s third album.

“If you haven’t found your own identity by the time your third album comes out, you might probably never find it,” says vocalist/guitarist Titan Fox V. I know that we have felt that our third album feels like ‘we are’ now, compared to ‘we want to be’ in the past. Not taking away anything from our previous albums at all, but when you start going on a mission, you begin with searching and trying. After a while you know the task, you know the way and you know about your strengths. Maybe that’s what the magical third album is about.”

Variety abounds on “Poseidon”, with HAMMER KING engaging in strident, call-to-arms jaunts like the opening title track and “Battle Of Wars”. Twin guitar harmonies and fierce gallops highlight “7 Days And 7 Kings” and “Where The Hammer Hangs”, while the true metal call is heeded on the mid-tempo “Warriors Of Angelhill” and “Glorious Nights Of Glory”.

“‘Poseidon’ sounds more organic, more open, warmer,” notes Fox V. “I like the sound of the drums especially, they have a sort of an ’80s vibe to them. Of course, the songwriting has also taken a step forward, if you like. We still have the typical HAMMER KING songs, such as ‘The King Is A Deadly Machine’ or ‘Battle Of Wars’, but there are some songs we have not made before like the ‘Nautical Trilogy’, which includes the title track, ‘At The Mercy Of The Waves’ and ‘We Sail Cape Horn’.”

HAMMER KING’s progression is best exemplified on album standout “We Sail Cape Horn”. An adventurous, sea-faring number that is equal nods to classic IRON MAIDEN and progressive rock, “We Sail Cape Horn” ended up being the most difficult number on “Poseidon” to pull together. According to Fox V., the end result was more than worth the work that went into creating the song.

“Writing ‘We Sail Cape Horn’ was a bit of a lengthy process. Many parts came in and out of the song over some months. I basically made a demo of it alone and then showed it to the band. They questioned everything after the middle part, so I changed that all over again. In the end, we had a really big song with a real progression in it: Beginning with the protagonist feeling the desire, the urge to go to sea on a huge sailing ship — then actually sailing on the ship, experiencing the loneliness aboard with only strangers around and finally sailing Cape Horn with its horrifying waves and storms. They sail in the name of the King, so what gets them through the horrors of Cape Horn is singing and praising ‘Thine is the Reich and the kingdom eternally, God bless the King’. It is a proud song closing a proud album.”

An album stocked with future anthems at every corner, “Poseidon Will Carry Us Home” is representative of a band now hitting its creative stride — and fully realizing it. “The studio work with Charles Greywolf is a time of sheer joy and fun, but also a highly relaxed time where everyone constantly gains power and self-confidence,” finishes Fox V. “I have never sung more relaxed, we have never shot more from the hip when it came to playing. But certainly, it is a very fulfilling progression starting with no songs at all and ending up with a mixed and mastered album sporting massive artwork!”