Veteran Rochester, New York doomsters ORODRUIN have signed with Cruz Del Sur Music for the release of their second full-length album, “Ruins Of Eternity”. The album — the band’s first in 16 years — will see the light of day this October.

Originally formed in 1998 by John Gallo (guitar), Mike Puleo (bass/vocals), Nick Tydelski (guitar) and Mike Waske (drums), ORODRUIN broke onto the American metal scene with 2003’s “Epicurean Mass”, which remains their lone full-length album to date. From the vintage school of BLACK SABBATH and SAINT VITUS doom with a European twist, ORODRUIN’s penchant for churning riffs and atmospheric passages instantly put them on the global doom metal map. The band issued a split, compilation, demo and EP in ensuing years, all building up to the eventual release of their sophomore album.

According to Gallo, ORODRUIN wrote nine new songs from 2016 to 2018, with a tenth song, “Letter Of Life’s Regret” coming from 2005. The album was tracked throughout 2018 at Wicked Squid Studio and is currently being mixed with the mastering process right around the corner.

“Stylistically, the songs are in the epic doom realm like the master titans of the 1970s, SABBATH and JUDAS PRIEST,” says Gallo. “The songs are a long-awaiting evolution in our writing and chemistry among brothers on a treacherous journey that will finally be unleashed to the masses.  We hope it translates well to the hearts and souls of our fans worldwide.”

In preparation for the band’s triumphant return to European shores for this fall’s Hammer Of Doom festival, ORODRUIN have enlisted drummer Kevin Latchaw of labelmates ARGUS, who is temporarily manning the drum spot while the band searches for a replacement for Waske, who left ORODRUIN in April of 2018.

Gallo: “We are extremely honored to be playing the same night as Uli Jon Roth and TROUBLE alongside our classic doom brothers MIRROR OF DECEPTION, SKALD and ATLANTEAN KODEX on the next day, to mention only a few!  We can’t express how amazing it will be to be playing a substantial doom metal festival in Germany again. We hope people enjoy the new material as much as we do playing it.”

ORODRUIN’s addition to Cruz Del Sur adds to an ever-growing stable of excellent doom metal bands. Not only will the partnership expose ORODRUIN to new audiences, it will put them in close company with many bands who they consider contemporaries. “We have been aware of Cruz Del Sur for a while and it seemed like the perfect home for us as we have a more European audience that appreciates our style of doom metal. Plus, it will be great to be alongside our fellow doom friends in WHILE HEAVEN WEPT, SLOUGH FEG and ARGUS.”

A MESSAGE FROM KEEP IT TRUE FESTIVAL! 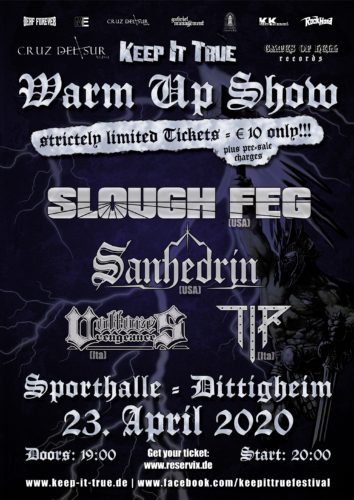 Due to the great demand and many years of faithful support from you, we decided, in cooperation with our friends from CRUZ DEL SUR MUSIC and GATES OF HELL RECORDS, to make the official Warm Up on Thursday in Dittigheim a full WARM UP show with FOUR high-class bands. As a big thank you to you, we will offer the tickets for only 10 Euro (plus presale fee) Expenses Contribution.
You can order these under this link. To save shipping costs you can use the Print@Home feature. At the doors ticket will be exactly 10 Euro without fees and we will keep around 50 tickets for the doors.

Of course the tickets are strictly limited!

After the show, there will be the usual Metal Disco with Thorsten MOR Hepp.

On this occasion, we will already be giving out the festival wristbands for the KIT Festival throughout the Warm Up Show (on presentation of the ticket, of course) to speed up entry on Friday.
In addition, we are currently working on further measures to optimize the admission on Friday, but later there will be a separate newsletter.

KEEP IT TRUE WARM UP SHOW