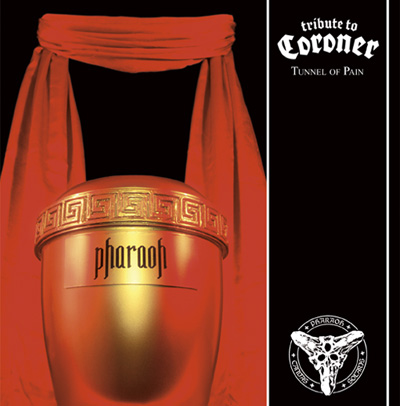 The first item to be released is a 7’’ split EP with fellow-mates CANVAS SOLARIS (Sensory Records). These two bands have committed to an excited but demanding task, covering each one a different CORONER song! PHARAOH performs a very professional and convincing version of CORONER’s classic “Tunnel of Pain”, while CANVAS SOLARIS hits the right notes with their personal version of “Arc-Lite”. This 7’’ is to be intended as a tribute to the legendary Swiss band of which both PHARAOH and CANVAS SOLARIS are long-time fans!
The release will see the light before summer 2010 and will be strictly available through Cruz Del Sur Music mail-order and other selected sales point.

Second to be released, in October 2010, is the “Ten Years” EP (cruz38) which was announced for 2009 but later postponed due to band and label other personal and professional commitments. This “so-called EP” (total playing time of almost 26 minutes!) starts with the title track (feat. Jim Dofka’s guest solo) and “When We Fly”, 2 unreleased songs out of the “Be Gone” recording session.
Then comes the first surprise of the album, a cover version of New Model Army’s classic “White Light”, with Tim Aymar giving out an exceptional and singular performance to his standards.
Track 4 and 5 are “Reflection and the Inevitable Future” and “Nothing I can say” which were  first released as a bonus 7’’ on the “Be Gone” limited gatefold LP release (cruz999).
To close the album, PHARAOH comes with another particular cover song, SLAYER’s “Tormentor”, out of the classic album “Show no Mercy”.
The album (again enriched with JP Fournier’s original artwork) is to be considered musically more a follow-up of “Be Gone” than an insight of what’s to come next in the future of PHARAOH.

Future that will shortly see the band enter MCR Studio again under the supervision of Matt Crooks, to start recording its fourth full length album to be released in Spring 2011.