While Heaven Wept announces the release of “Triumph:Tragedy:Transcendence – Live At The Hammer Of Doom Festival”, their first Live CD/DVD set, on Cruz Del Sur Music. 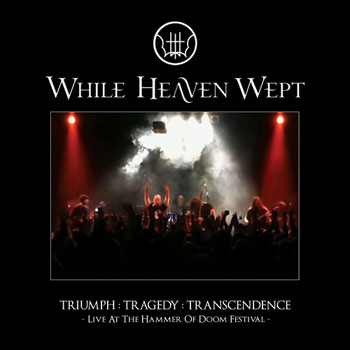 WHILE HEAVEN WEPT are currently working on the forthcoming release of their new live album “Triumph:Tragedy:Transcendence – Live At The Hammer Of Doom Festival” set for a November 2010 release date.

“Triumph:Tragedy:Transcendence” will be made available as a CD/DVD set courtesy of Cruz Del Sur Music, as well as a 2LP set via a joint collaboration between Cruz Del Sur Music, Iron Kodex, and High Roller Records. The DVD portion will contain several bonus features that will be detailed after the band will finish the studio work on the masters.
The release is a stunning 24 track audio capture of WHILE HEAVEN WEPT‘s performance at the Posthalle in Würzburg, Germany on February 6th, 2010. The final master will be later synchronized to the multi-camera pro-shot footage, resulting in the band’s very first DVD. This release is guaranteed to take all fans by surprise, seen the awesome quality of both audio and video materials.

The philosophy behind this release is twofold; first, it is an expression of gratitude to everyone who attended the show – who made it such a special, unforgettable experience for the band. Secondly, being that there are many places that WHW would like to perform, but they’ve yet to reach; hopefully this record will hold those waiting over until the band can broker a deal to appear in front of their eyes, in person.

In the words of Tom Phillips ” the audio quality of this release is incredible – perhaps in some ways better than even “Vast Oceans Lachrymose” – along with the excellent energy of the performances and the excitement of the improvisations. The video is even more amazing, so expertly filmed and edited by our friends at Streetclip TV in Germany”.

Expect “Triumph:Tragedy:Transcendence – Live At The Hammer Of Doom Festival” to be an incredible live testimonial of WHV excellent musicianship and stage power, a release which will haunt your stereo and DVD player for many a night of relentless epic doom!!

More details will follow in the near future, but for more information do not hesitate to contact Cruz Del Sur Music… we are as excited as you are about this colossus of a release!