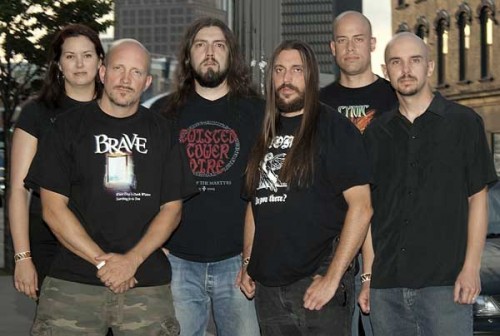 The moment has come to release the truth. We have been holding this statement for a few months now, and it is finally time to speak: Cruz del Sur Music recording artists WHILE HEAVEN WEPT will no longer be part of the label’s roster. Why? Not for our decision. We love the band and have been working closely with them making “Vast Oceans Lachrymose” one of the best releases for Cruz so far. The response was so overwhelming and impressive that, we already felt, things would have gotten better for WHILE HEAVEN WEPT.

We are therefore thrilled, but also sad, to state that WHILE HEAVEN WEPT have signed a new record deal with Nuclear Blast Records. Yes, the band has finally made the further step, and as much as we are sad to see them go, we are also, as fans, happy to be the first ones to witness their new glory days to rise.

The following are the complete press releases from the three parties involved, which we want to fully publish. It is an important moment for Cruz Del Sur Music, passing the While Heaven Wept torch onto Nuclear Blast Records… may it keep on burning high in the Heavy Metal nights!!

“I started working with Tom Phillips on the release of what was going to be “Vast Oceans Lachrymose” inJune 2006. Tom was already working on this album for a couple of years but had suffered from the bankruptcy of his two previous labels (in a row!) . We joked about how Cruz Del Sur Music would sink after signing WHW, judging by the goings-on. Almost 3 and a half years after, the release of “VOL” hit the market provoking an amazing reaction from the people who already loved WHW, but also conquering thousands of new fans. From then on, it was an exciting ride which has seen the re-release of their long out of print previous albums on cd, a series of glorious live shows, the peak represented by the forthcoming (19/11) release of their first live album “Triumph: Tragedy: Transcendence” available in both a cd/dvd limited edition and on vinyl. It was inevitable that WHW would catch the interest of bigger labels and I am not angry or disillusioned at all. I mainly see their going to a respectable and leading label as Nuclear Blast as a honor and a recognition of our work. Tom, Rain, Jim, Trevor, Michelle and Scott: I wish you the best for your career!”

“Nuclear Blast is extremely elated to announce the signing of WHILE HEAVEN WEPT!! Last year we were totally blown awayby the release of the album Vast Oceans Lachrymose (out on Cruz del Sur Music) from the US genre-defining and genre-defying metal band WHILE HEAVEN WEPT! This album was for sure the surpise of the year and not only for us, but every major metal publication in the world, as well as their longtime fans! Earlier this year the band played an amazing show at the HAMMER OF DOOM festival which has been captured on DVD / CD and will be released as “Triumph:Tragedy:Transcendence” (again on Cruz del SurMusic) In the meantime, after months of talking with mastermind Tom Philips we are very happy to announce that WHILE HEAVEN WEPT has joined the Nuclear Family!! WHILE HEAVEN WEPT are already in the studio recording their follow up album “Fear of Inifinity” which will be out April 2011!! The band are also developing tour plans and have already confirmed some festival appearances as well, with many more to come! WHILE HEAVEN WEPT who have been an insider tip for many years are taking the next step in their career and we cant wait to bring them to the next level!” 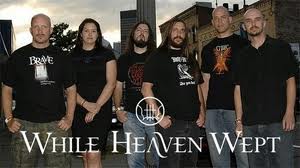 “For the past 21 years, While Heaven Wept has been committed to two things: performing music that is sincerely from the heart, without any other boundary, and secondly, we have always strived to deliver the absolute best sounding albums that we could create at any given time, regardless of the changing landscape of the industry; insuring each release has the greatest production possible is paramount for us in terms of the clarity of expression, and additionally, we hope to offer the very best experience for those who take the time to listen. With this in mind, it made perfect sense for us to align with Nuclear Blast, who also have been committed to offering only the very best in the world of Heavy Metal. Through this partnership, we will surely be able to continue delivering the best productions possible while presenting our musical vision in a different arena, betraying neither our past nor our ideals. Nuclear Blast’s support of our musical identity is truly an honor, and everyone who has stood by us all along these years need not worry; While Heaven Wept is what it is, and cannot be anything else. That said, we’ll also never release the same album twice…everything stems from where we are in the moment emotionally and spiritually, so while the core elements/influences of the band have remained the same since our inception, we will continue to express ourselves in whatever way feels natural at the time. Expect the unexpected. We look forward to revealing our new album “Fear Of Infinity” together with Nuclear Blast very soon!”