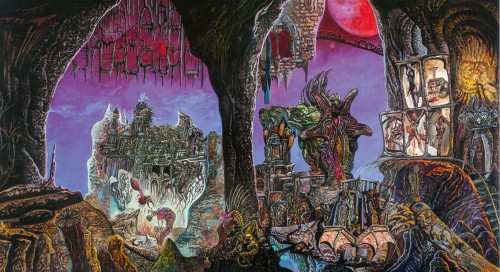 Pitchfork.com has posted the exclusive world premier of “No Peace Beyond the Line,” the brand new track from Pennsylvania doom metal outfit ARGUS. The song, taken from the band’s forthcoming third full-length Beyond the Martyrs, is streaming at this location.

Beyond the Martyrs starts where their 2011’s release Boldly Stride the Doomed had left us…at the Ruins of Ouroboros. In between these two releases ARGUS has tested its strength and valor in several live shows both in their homeland and in Europe, receiving high praises from fans and from the record industry. Although a sense of impending fate marks again their compositions, the characteristic doom metal elements which were a distinguished trademark of ARGUS’ past releases have now given way to what is primarily to a genuine heavy metal approach, its nature rooted in the most classic environment of Heavy Metal tradition.

Cruz Del Sur Music will release Beyond the Martyrs on October 1st in North America and October 4th release in Europe in cd and digital formats. A gatefold vinyl edition including an A2 poster depicting Brad Moore’s awesome artwork, will be released on November 1st.