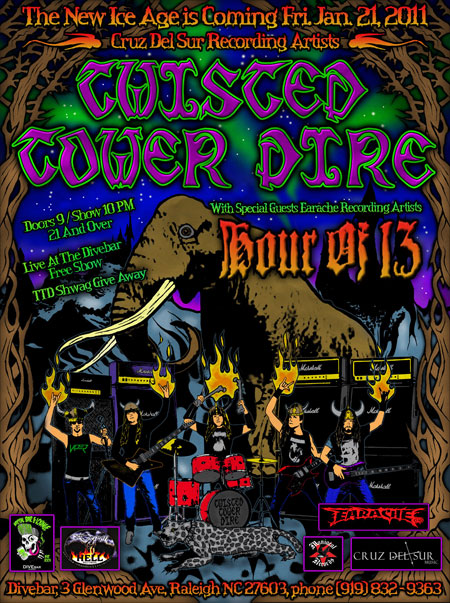 Cruz Del Sur Music new recording artists TWISTED TOWER DIRE will perform a free show at the Divebar in Raleigh, NC on Friday January 21st, 2011 together with Earache recording artists HOUR OF 13. All of the metal heads out there in the steamy American Mid-South should head out for a night of entertainment!

This North Carolina/Virginia based band has been blasting stages across the US and Germany for the past 11 years, and is due to release their 5th studio album, “Make it Dark”, via Cruz del Sur Music.

In the words of guitarist Scott waldrop, as of Dec 2010, TWISTED TOWER DIRE “Make it Dark” is in the final stages of production being mixed by Chris Salamon (While Heaven Wept producer) and assisted by Tom Phillips of WHW. The raw drums, bass and guitar tracks were engineered and produced by Marc Stauffer and TTD last summer. The raw vocals were engineered/produced by Johnny Wooten (Widow) and TTD.

The band is using this album to redress some of the flaws of the previous “Netherworlds” and bounce back with a well produced catchy album which showcases the unique voice of new singer Jonny Aune, seeing as how this is the bands’ first album without their former singer Tony Taylor (RIP).

The main guts of the songs (lyrics and chord progressions) were written by guitarist Scott Waldrop, and the rest of the band members helped comb over and perfect all the details which is the way TTD has always done things. This is the first album where the band haven’t had Tony as a major song-writer/contributor, so fans will hear a noticeable shift in influence. The style and content has departed a bit from fantasy-inspired “battle metal” to follow a more late 70’s American punk/nwobhm influence, mainly because that’s one of Scott’s fixations, and no one in the band stopped him from writing all the lyrics …  You can therefore  expect less songs about fighting dragons and more songs about darkness and evil women (but don’t worry, no love songs included).

Check out the band’s live output in this fan recorded live show, and head out to the Raleigh show!!