The band is entering the studio on Saturday June 18th to start recording their second full-lenght, ‘Dawn of Infinity’ which will be released by Cruz Del Sur Music in the fall of 2011. To celebrate this new allegiance, we reached guitarist Christian Horton to ask him a few questions about DARK FOREST‘s new album and the inking of a record deal with Cruz Del Sur…

What are Dark Forest’s feeling about inking a deal with Cruz Del Sur Music? Any particular expectations?
We’re extremely pleased to be signing to Cruz Del Sur, it’s a great label that works with a lot of bands which we admire, we’re in good company! We’ll be hard at work over the coming months writing and recording and we hope to be able to get our music out there to as many people as possible. We’re confident that the partnership between the band and the label will be a very positive and productive one!

You are entering the studio to start recording the new album… how is the new material going to continue the tradition of your classic yet punishing sound?
Yes we originally went into the studio last year to record what basically turned out as a promo CD and now we’re about the enter the studio again to record the full second album which will be called ‘Dawn of Infinity’. Compared to our first release, the new songs are generally more intricate and there’s a wider range of lyrical themes but they still have the Dark Forest sound. Our songwriting is constantly growing and developing and we’re really excited about the new material. I’d say that if you enjoyed ‘Dark Forest’ then you’ll enjoy ‘Dawn of Infinity’ without a doubt! 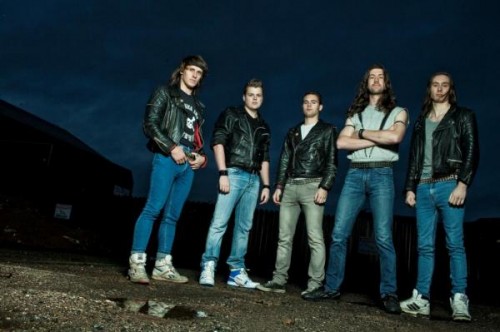 The UK was a hotbed for anthemic, classic heavy metal, and Dark Forest has somewhat put NWOBHM back onto the world musical map… how do you perceive the current status of British metal, and how such a young band decided to pursue this unconventional, classic path?
Well we never really thought about pursuing a particular path, our music was naturally born from our influences and our own creativity. There’s no need to think about specific genres while writing music, it misses the point. It’s more about writing honestly and truthfully and just see what comes out, if you get bogged down in certain genres or subcategories then the music often suffers, becoming a generic repitition of something that was probably done better in the past anyway. Also whilst the music is ‘classic’, we feel like we are definately bringing something new to the table. But yeah, we are glad to be helping to bring British Heavy Metal back again and there are some brilliant young bands coming out here. I hope it’s the start of a new era!

What fans can expect from Dark Forest in the near future?
Our second studio album ‘Dawn of Infinity’ will be released by Cruz Del Sur Music this Autumn. Fans can expect much more activity from us, and further releases with Cruz Del Sur in the very near future, there are already a number of gigs in the pipeline and we already have much of the new material for a 3rd album ready and waiting. Overall, fans can expect Dark Forest to continue to evolve and develop musically, delivering something fresh with every release!

And while you are waiting, check out some of DARK FOREST‘s music on their Myspace page!