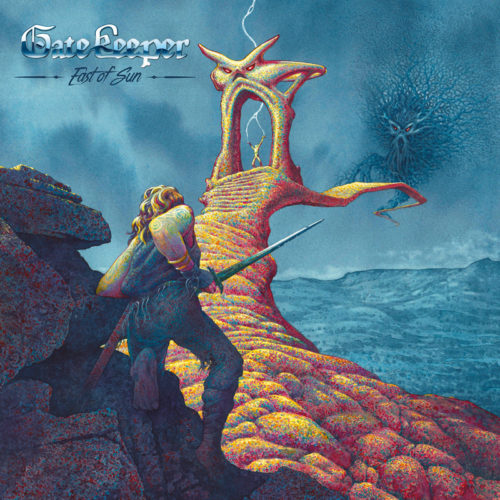 Rewind back to the early months of 2017, though, and it was legendary British artist Duncan Storr (DARK FOREST, EDGE OF SANITY, RAGE, SKYCLAD) who became one of the first people to hear the demos that would ultimately become “East Of Sun”. Well before they were signed to Cruz Del Sur, GATEKEEPER leader Geoff Blackwell mustered up the courage to email Storr a demo to see if he’d be willing to work on the project. Luckily for Blackwell and co., Storr took an immediate liking to GATEKEEPER and got down to business. 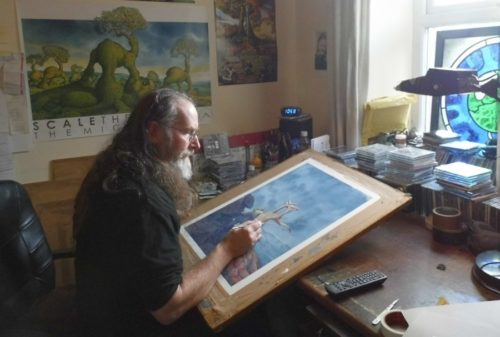 “I liked the demo and asked to hear a few more songs if they had more,” says Storr. “Geoff sent me over another two demos to listen to so I could get a good feel for their sound. The titles of the tracks ‘Warrior Without Fear’, ‘Oncoming Ice’, and ‘East Of Sun West of Moon’, sparked something and I got a few ideas from listening to the tracks.”

Storr proceed to reach into his vault and selected an unfinished piece he thought would be suit GATEKEEPER. “I sent Geoff a few of these images and relayed how I would like to incorporate some of the song ideas and embellish the atmosphere in the painting,” he says. “He got back to me after showing the rest of the band. The band have been great to work with and have kept me informed and added more demos for me to work with as I paint. I find this always helps.”

“We had a short list of people that we wanted to work with on this album and Duncan Storr was on it,” adds Blackwell. “He is a real gentleman and a master behind the paintbrush. The piece he showed us instantly clicked with our vision for the record and in a way, it drove us to work even harder on the music in order to match the quality of his art. GATEKEEPER would like to thank Duncan for his hard work, dedication to his craft and for being a loyal fan of rock and roll.”