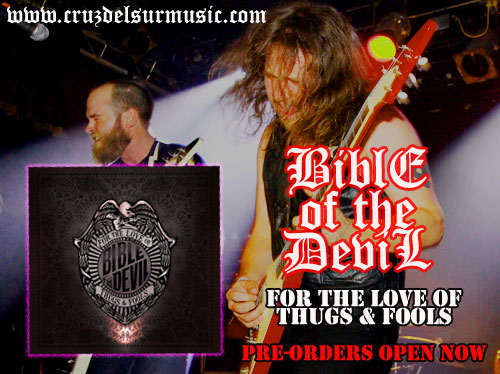 “For the love of thugs and fools” seems to be a tribute to the eerie world of rock and rollers and metal heads. We certainly know that BOTD has hit the road enough to be able to tell us a thing or two about them. Why did you come up with such an album concept?
Nate Perry – There’s a saying among people who write: “write what you know.” On this album, most of these song lyrics stay away from anything fantasy-based, which is pretty typical in metal and something we’ve dabbled in as well. But generally, when we’re working on a record, the first song we finish tends to set the tone for the rest of the writing. In this case the first one was “Night Street,” which is a very personal story from Mark’s perspective, and the writing pretty much continued along this path. In the last number of years we’ve been through changes, we’ve had friends die; we’ve had to deal with what is commonly referred to as “real life”. When we’re all out there in the world as young, reckless rockers we generally all think we’re invincible. This record deals with the other side of the coin when we all discover that this isn’t the case. Having spent so much time on the “invincibility” side of the equation, it was only fair to give time to the other.

As a hard road-hitting band, where will you tour supporting the album?
Nate Perry – Definite plans include the south and Midwest next month, and Europe in October and November. Beyond that we’ll of course do more in the Midwest and hit the other coasts. I guess it depends what kind of opportunities come our way.

How would you describe “For the love of thugs and fools” in terms of progression for BOTD’s sound?
Nate Perry – When putting the record together, a number of the songs really felt like a radical departure from the Bible sound. We tried to experiment with some drum beats that were outside of our comfort zone, and pay a lot more attention to the vocal melodies. Once all of the pieces fell into place, we realized that it still sounds like Bible and stands up with the best of our work. The end result is a big step forward for us, but at the end of the day it clearly is our sound and vision. I’m happy with it in that
aspect, that it’s a nice move forward without being a jarring change of mission.

Do you have any anecdote from the recording sessions?
Nate Perry – I have 2 dogs, and I occasionally had to bring my dogs with me to the recording sessions, since we had some really long days/nights. We had the idea of adding some ambient nighttime noise from the neighborhood we were recording in. Rather than trying to capture someone else’s barking dogs, we figured we might as well use my dogs on the record. My dogs always bark like maniacs when they hear a door bell, so I went outside to ring the studio’s door bell and Mike recorded them reacting to it. You can hear them in the middle section of “The Parcher”. I’m so proud of them, they sound ferocious even though they’re really not!