Irish epic metallers TERMINUS have signed with Cruz Del Sur Music for the release of their second studio album, “A Single Point Of Light”. Recorded at the home studio of instrumentalist David Gillespie and mixed and mastered by Richard Whittaker (SOLSTICE), the album will see the light of day this November. The artwork was created by Anaïs Mulgrew.

The TERMINUS/Cruz Del Sur relationship stretches back to 2013 when both parties were tossing around the idea of releasing the band’s “The Reaper’s Spiral” debut. While the idea didn’t come to fruition then, there is no better time than the present — Gillespie says Cruz Del Sur is a “natural fit” for TERMINUS since their friends in RAVENSIRE, ARGUS, LETHEAN, GATEKEEPER and LUNAR SHADOW already call the label home.

TERMINUS ceased to be a live entity in late 2017 after triumphant appearances at Keep It True, Up The Hammers, Pyrennean Warriors Open Air and Ultimate Revenge in Helsinki, enabling the band (now a two-piece featuring vocalist James Beattie and Gillespie on instruments) enough time to focus on new material. According to Gillespie, the goal with “A Single Point Of Light” was to “evolve enough so that a second album was not a redundant exercise while still remaining true to our core sound.”

“As the principal songwriter, it was self-imposed pressure to prove — to myself — that I wasn’t a one-off and that I could write another record of equal or superior quality,” he continues. “Hence, we did not simply poop out an album in 18 months, but took our time.”

Like its predecessor, “A Single Point Of Light” is a deep dive into the realms of epic and progressive metal, with bountiful guitar harmonies, complex song arrangements and the controlled, but emotive delivery of Beattie. It results in an album that is a comfortable step forward for TERMINUS while not reneging on the core tenets that initially brought the band together in 2012.

“The obvious thing is that we haven’t turned into a Sisters Of Mercy tribute band or anything silly like that,” says Gillespie. “The new album is in the same vein and we have retained our ethos — which seems to have become strikingly popular of late — that the album should fit on one side of a 90-minute tape and should split evenly and sympathetically across both sides of a 12-inch LP. Some elements of the sound have been dropped, some have been focused on and there are a few new textures in there to keep things fresh.”

“A Single Point Of Light” again finds TERMINUS exploring lyrical themes off the traditional heavy metal path. Instead, the band continues their approach of interpreting classic science-fiction tales alongside stories of their own telling.

“We have always been antithetical to the rest of the subgenre, lyrically,” wraps Gillespie. “Our songs are not about heroes and their deeds. They’re about cowards, deviants, deceivers — the scum of the universe, really. There are no heroics and no victories to be found in our world.” 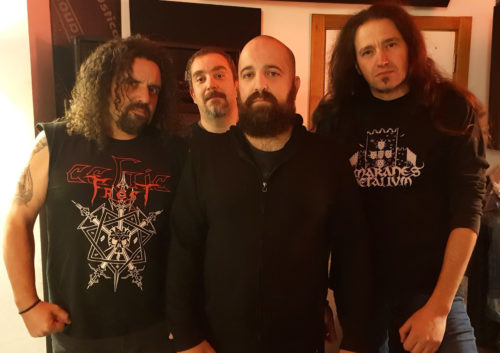 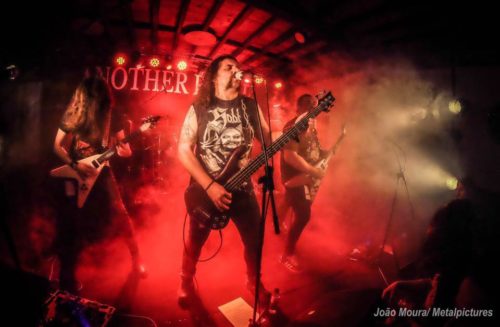 Comments guitarist Nuno: “After we finished recording our album ‘The Cycle Never Ends’, we started preparing for the shows that would follow. Unfortunately, after a while, Zé started facing some changes in his personal life that prevented him from rehearsing as much as he would’ve liked. So, after a few weeks in a sort of limbo, he finally approached us and told us that he couldn’t continue playing with the degree of commitment needed, so he’d leave the band in order for us to find a replacement as soon as possible. After some searching, we had a few guys willing to step into Zé’s shoes.

“So, we planned a few auditions and there was no question that Mário would be the one taking the battleaxe for future battles! Although Mario played mainly in death metal acts in the last decade (BLEEDING DISPLAY, for example), recently he had been reconnecting to his roots and started playing in a hard rock band called 15 FREAKS. Another fun fact was that way before Zé left the band, he saw a RAVENSIRE concert and enjoyed our sound so much that he got in touch with us! Who knew that one year later he’d be joining the fold?”

Shortly after the departure of Zé, long-time drummer Francisco Machado stepped down from RAVENSIRE, citing personal matters. “Honestly speaking, this was an even bigger blow, because F had been one of the main forces in getting RAVENSIRE together,” says Nuno. “Of course, we fully understood his motives and nothing changed in our friendship. This time, though, instead of trying to find a replacement and going through auditions and whatnot, we went straight to MIDNIGHT PRIEST‘s drummer Alex since we knew he was available to commit to another band and we’ve been friends and mutual fans of each other’s bands since the beginning!”

With their new lineup in place, RAVENSIRE has begun work on their third full-length album, which they plan on recording during the first half of 2018. The band has also planned some new live assaults: